Investment decisions influence the growth of the firm and shareholder’s wealth in the long run. The consequences of investment decisions expand in to the future and have to be borne for a longer period of time. These investments have a decisive impact on the direction of the firm’s growth (Petty et al, 2015). They will directly influence the size of the company and its business operations and thereby will impact shareholder wealth. One wrong investment decision can prove to be disastrous for the survival of the organization. Unnecessary expansion of organization’s assets will result in heavy costs. On the other hand lack of investments in assets will make it difficult to compete in the market.

Investment decisions generally require a large sum of money making it imperative that the company plans ahead so that they can make arrangements for procuring funds in advance (Wood and Sangster, 2012). Investment programs must be carefully analyzed and the means by which the company expects to collect the required funds, internal or external should be arranged in advance.

Given the irreversibility of most investment decisions firms must make sure it doesn’t take any decisions that could lead to heavy losses (Hiller et al, 2011). Once an investment is made on a capital item it will be difficult to find a market for that. Therefore failure of such costly investment decisions could have a drastic affect on company profitability.

Investment decisions call for a long term commitment of funds. Taking on such an investment will lead to an increase in gains but it could also result in frequently fluctuating returns (Jonathan, 2010). This will change the risk complexities of the firm and the firm might end up being considered more risky. This impact investment decisions have on the basic characteristics of the organization makes it imperative the firm carries an investment appraisal.

The types of methods organizations use for investment appraisal can be divided to two categories namely traditional methods and discounted cash flow methods (Fridson and Alvarez, 2011). Traditional techniques include Payback Period and Return on Capital Employed (ROCE) whereas Net Present Value (NPV) and Internal Rate of Return (IRR) are discounted cash flow methods.

Net present value tells how much an investment adds to the shareholders wealth. Therefore the larger the NPV the more value it adds to the organization. This technique calculates the present value of the cash flows arising from the investment based on the opportunity cost of capital (Gibson, 2012). It shows how much a project contributes to the shareholders wealth hence goes in line with the overall goal of the company that is shareholder wealth maximization and takes time value of money under consideration. Unlike the payback period method, NPV consider all relevant cash-flows irrespective of when they occur.

If the net present value is a positive figure by making the investment company can increase its wealth but if it is a negative figure it is advised to avoid such investments (Caglayan & Demir, 2014). If two projects are independent meaning cash flows aren’t affected by one another and NPV exceeds zero then both projects should be accepted but if they are mutually exclusive the project with the highest positive NPV should be accepted. If neither of the two projects has a positive NPV then both should be rejected. If both projects A and B are independent both should be accepted considering both have positive NPV values. However if they are mutually exclusive Project A should be selected considering it has the highest NPV.

Another main technique of investment appraisal is Internal Rate of Return. This calculates the cost of capital at which the net present value of all cash-flows equal zero. In other words IRR is the discount rate that forces the present value of the cash inflows to be equivalent to the initial investment. It is the hurdle rate using which organizations decide to either accept or disregard a project. This technique is closely related to NPV and similarly uses discounted cash-flows in its calculations (Atrill and McLaney, 2013).

Figure 2: Relationship between NPV and IRR 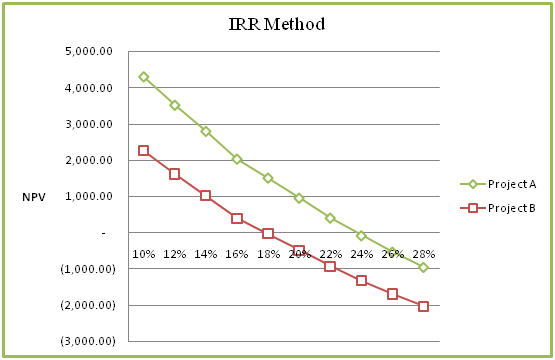 The time required to recover the initial outlay made by the firm based on cash flow values is calculated by the payback period method (Watson and Head, 2007). One of the main drawbacks of this method is that it disregards the time value of money. In addition this method doesn’t reflect on the cash flows that come after the payback period.

If all factors of two projects are similar the project with the shortest payback period is selected (Owen, 2003). If the organization can take on more than one investment it can put up a benchmark payback period and select projects that have a payback period less than the benchmark.

If all factors of two projects are similar the project with the highest ROCE is selected (Baker and English, 2011). If the organization can take on more than one investment it can decide on a target ROCE and select projects that have a ROCE greater than the hurdle.

The average after tax cost of capital of an organization and be defined as the Weighted Average Cost of Capital (WACC). In other words this is the minimum rate of return the company anticipates to compensate its various fund providers (Christofferson, 2003). WACC is calculated by proportionately weighting the various sources of funds acquired by the company. The two main sources of financing for any organization are equity capital and debt capital. Therefore the two primary components of WACC are cost of equity and cost of debt. WACC is calculated using the cost of each element in the company’s capital structure and the relevant weight of that element (Berry and Jervis, 2005). WACC illustrates how difficult it is for the company to obtain funds and an increase in the WACC indicates a decrease in the firm value. The lower the WACC is the cheaper it is to fund that company.

Use of WACC in Investment Appraisal

WACC is used to assess the value of different investment so to determine which investment is worth perusing and which is not. 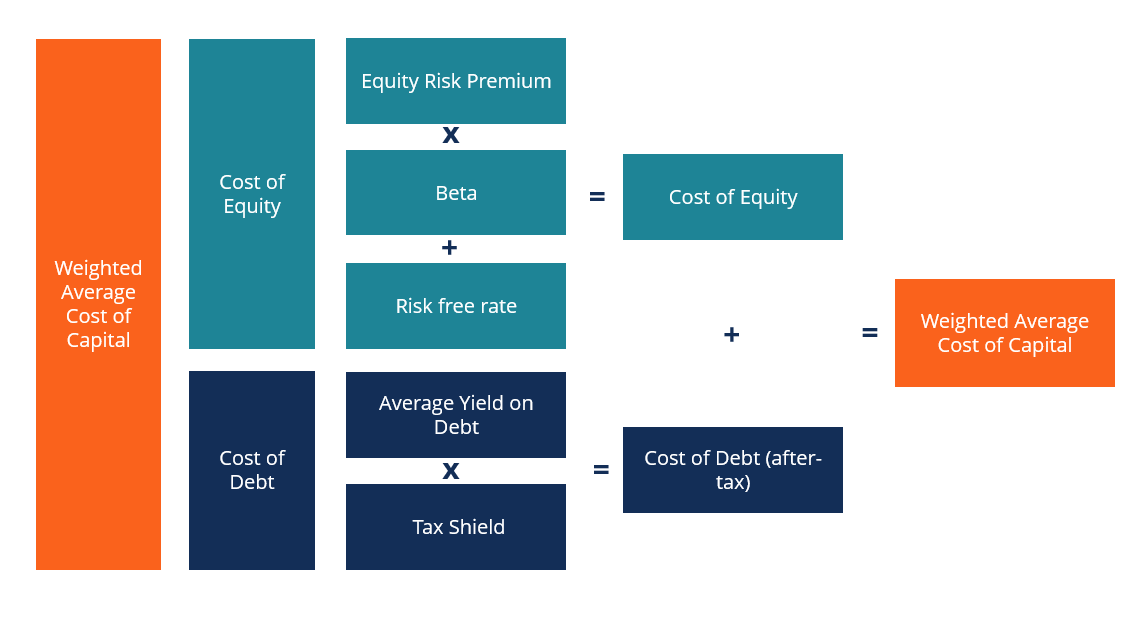 The rate of return required by the shareholders of the company is the cost of equity (Brigham and Erhrardt, 2001). In other words it is the minimum amount of return the company has to make for its share price to remain the same. If the organization is unsuccessful in delivering this return the shareholders might be tempted to sell the shares which could ultimately result in a drop in the share price. Since the cost of equity financing doesn’t have an explicit value calculating the cost of capital can be quite complicated. Unlike debt capital which has a predetermined cost associated to it in the form of interest, equity financing has no such fixed price the company is bound to pay (Drury, 2008). Organizations employ various techniques like Dividend Growth Method and Capital Asset Pricing Method (CAPM) to calculate cost of capital.

rm = Required Rate of Return on the Market Portfolio

B = Beta Coefficient of the Security The yield to maturity of the debt instruments of the company is used to obtain the cost of capital (Brigham and Houston, 2009). When a company acquires debt capital a prearranged interest rate is decided based on the amount and the time period of the debt. The after tax cost of debt is used in the WACC calculation because of the tax shield received by debt financing.

In conclusion all investment appraisal techniques have their strengths and weaknesses but NPV is considered the most suitable considering it has a clear link with shareholder wealth maximization and is an actual measure of the value added to the company by investing in the project. However the information provided by other techniques should be considered when making the final decision. The report also discusses the concept of weighted average cost of capital and its various uses.

Abdullah, A. (2005), ‘Capital structure and debt maturity: evidence from listed companies in Saudi Arabia’, Journal of Business and Economics

Hovakimian, A., Opler, T. and Titman, S. (2009), The Debt-Equity Choice, Journal of Financial and Quantitative Analysis